Discussion: Much Ado About Nothing 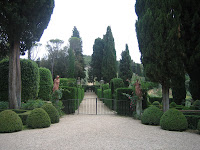 The play: Much Ado About Nothing

My favorite line:
I do love nothing in the world so well as you.
Is not that strange?

When I was in Italy a few years ago, our Tuscan tour included a stop at Vigna Maggio. The winery looked vaguely familiar during the tour, and eventually I realized -- thanks to a poster displayed in the lobby -- that the winery had been the setting for Kenneth Branagh's 1993 film version of Much Ado About Nothing. "Huh," I thought. "This place looked grander on film."

It's not a bad analogy for Much Ado About Nothing. The play is frequently performed and received well by audiences, despite the fact that, on closer examination, the plot is painfully contrived, the villains are relatively unambiguous, and the clown of the play (i.e., Dogberry) is a one-trick pony of misused vocabulary. What is it that we find so appealing?

The answer, of course, is that we love Beatrice, one of Shakespeare's greatest female comic roles. When performed well, she is a joy to watch, despite her edge of bitterness. We delight in her dazzling war of words with Benedick and marvel at her quick wit. We wonder about the couple's back story ("marry, once before he won [my heart] of me with false dice"), and we speculate endlessly about whether this couple will live happily ever after.

One could make a serious argument that Beatrice and Benedick are the most engaging couple in Shakespearean comedy.

That's fortunate, because these two characters are bigger than their own play. Nobody seems to care much about Claudio and Hero, the play's other pair of lovers. Claudio is not remotely likable: He is too cowardly to woo his own wife, and his motives for choosing her are questionable ("No child but Hero; she's his only heir."). He is quick to accuse her in the most callous way possible, and he makes light of her death (until, of course, he learns that she was innocent).

Then we have Hero, who for some reason puts up with Claudio's nonsense. Shakespeare gives her very little personality, no back story -- nothing to engage us. I have seen her played well on stage, but she doesn't come across well in print.

It occurs to me that Claudio and Hero could simply switch places with Romeo and Juliet. Then, the true lovers, our beloved R&J, could ride off into the sunset, and Claudio could swallow some poison in Hero's fake tomb instead.

To draw another comparison, measure the characters in Much Ado against the characters who populate The Merchant of Venice. The characters of our current play seem flat and empty in comparison, with weaker personalities (always excepting Beatrice and Benedick) and fewer ambiguities. In fact, the only truly ambiguous character in Much Ado is Don Pedro. Why does he volunteer to woo Hero on Claudio's behalf? How serious is his marriage proposal to Beatrice? Why doesn't he have a wife already? Why, at the end of the play, is he sad during the pre-wedding dance? In this play, Don Pedro alone presents the kind of mysteries we are used to exploring among multiple characters in most other plays.

Fortunately, Beatrice and Benedick are engaging enough to transcend the weaknesses of their play. One gets the sense that if Shakespeare ever had a true love, she might have been very much like Beatrice.
at 11:59 AM