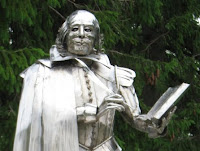 Officially, the Shakespeare in a Year project begins June 1. In the meantime, add this to your blog reader, sign up for an e-mail subscription, and vote in the poll at right to help us get started. This is going to be a challenge, to both my schedule and my intellect, but it's going to be an incredible journey. Join me.
at 9:28 AM