This weekend, I'm making my annual pilgrimage to the Stratford Shakespeare Festival, one of the best classical theaters in North America. I am so madly in love with this place; one of these days I'm just going to stay.

Within walking distance of my historic hotel are some of the best restaurants in Ontario, some of the cutest boutiques I've ever seen, and four of the continent's best theaters. The best part of being here, however, is that the entire community is built around a passion for theater. Being here means being part of a community that eats, sleeps and breathes Shakespeare.

For the record, I'm a confident Stratfordian, which means I believe William Shakespeare's poems and plays were actually written by Shakespeare, as opposed to Edward de Vere, Francis Bacon, Christopher Marlowe or any of the dozens of others whose names have been suggested. At the moment, the Oxfordians are the most vocal bunch.

For the sake of my own sanity, I'm not going to nitpick the Oxfordian point of view here. The Oxfordians are well organized online, and they are adept at picking fights with bloggers who disagree with their cause -- as a simple Google search will show. There is no reason to rehash the same old arguments here. Shapiro has already done an excellent job of picking the Oxfordian viewpoint apart (as did Bill Bryson in his excellent biography of Shakespeare).

But I do understand the desire to know Shakespeare -- and the frustration people feel with the disconnect between the documentary evidence of Shakespeare's life (mostly legal papers) and the genius revealed in his plays. It's hard to imagine that the author of Hamlet would have a neighbor arrested over a debt of just a few pounds. For some, it's also hard to imagine that a provincial actor with little formal education could write so eloquently about foreign travels and life at court (which is, quite frankly, pure snobbery). From there, as Shapiro says, it's just a short leap to believing that we must be dealing with two different men.

As Shapiro points out, one of the fundamental problems here is an underlying assumption -- made by Stratfordians and Oxfordians alike -- that the works are autobiographical. (Autobiographical works are commonplace now but were almost unheard of in Shakespeare's day.) Even Shapiro has been guilty of this mistake: "I flinch when I think of my own trespasses," he writes, perhaps in reference to his recent book 1599: A Year in the Life of William Shakespeare.

I'm guilty as charged. I, too, assumed the plays and poems were at least partly autobiographical, and I have said several times during the "Shakespeare in a Year" project that reading the complete works has been like "getting to know" Shakespeare. After reading Contested Will, I realize the limitations of that statement -- and am finally aware of the unconscious assumptions I have been making as a reader.

We won't be able to persuade the Oxfordians (or the Marlovians or the Baconians) to become Stratfordians. (One can't have a reasonable argument with an unreasonable person.) But we can be more careful, as readers, not to assume that the complete works of Shakespeare are a kind of life story. It's so tempting to do, because we want so desperately to have those glimpses into Shakespeare's mind. Still, it's a habit we must break. Shakespeare is long gone, and we must judge his literary legacy on its own merits.

P.S. If you ever get to Stratford, go to the Parlour and order this. It is quite possibly my favorite food on this planet. 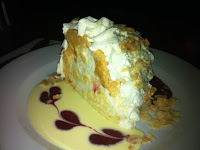